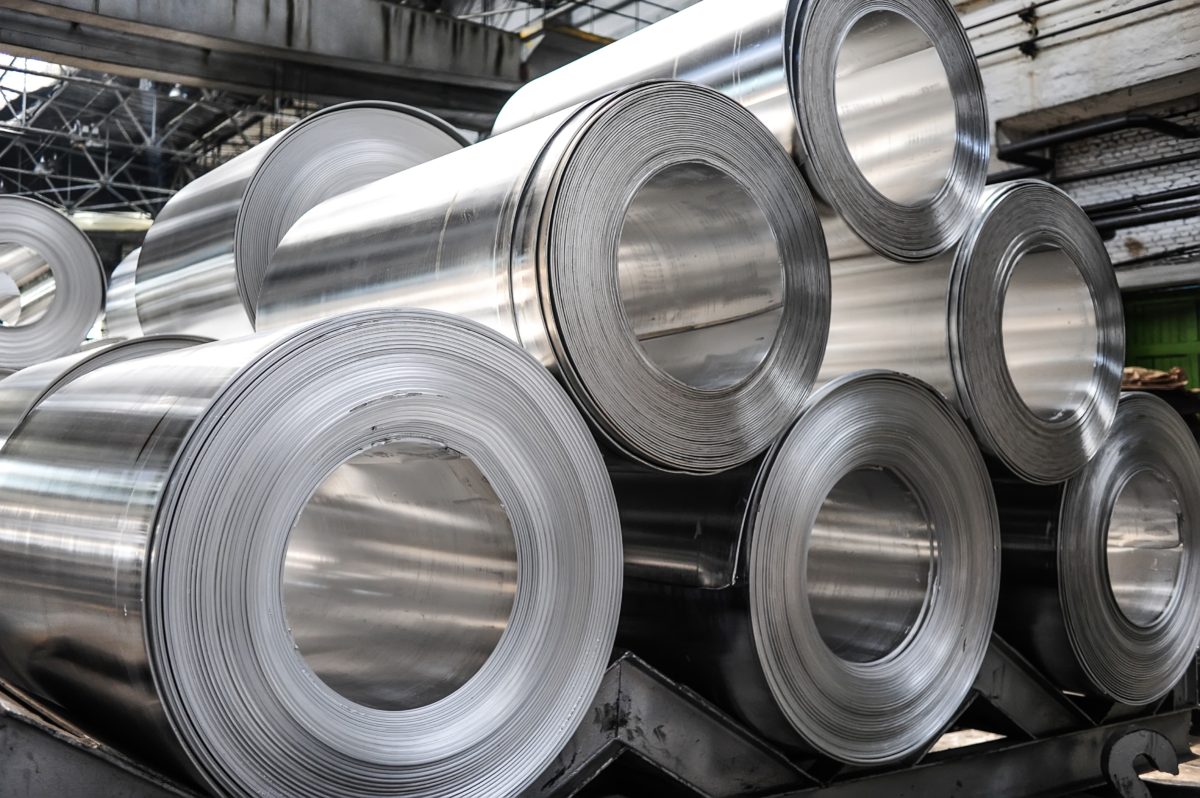 The importance of our domestic steel industry cannot be overstated. It is part and parcel of several major manufacturing sectors, including such crucial segments as defense, law enforcement and health care. A strong and intelligent trade policy regarding steel will affect not only the cost of steel in the United States but also its very availability in some specialties. The President and his Administration must pursue a truly “fair” trade policy that protects domestic steel production and manufacturing.

The Trump Administration is considering restricting steel imports into the United States on national security grounds under Section 232 of the Trade Expansion Act of 1962. While many pundits—and even economists—look at steel as a bulk-produced product that goes into cans and cars, the reality is steel is a specialty product that varies in strength, hardness and weight. Manufacturers of military products, for example, use anything from ultra hard steel for tanks and bunker bombs to alloyed steels, where nickel, titanium and other metals are added to change heat resistance, strength and weight so the steel can be applied to fighter jets and other super-special vehicles and devices.

And it’s not only the defense industry that relies on steel in all its various forms. Manufacturers of surgical devices, sports equipment, agricultural and construction machinery, and pipelines (to name a few) rely on a steady and reliable flow of quality steel that meets their specifications. If the United States doesn’t have a thriving steel industry—if it is damaged or crushed by unfair or unwise trade policy—we not only face potential war-fighting supply shortages; we also are looking at national economic vulnerabilities that infect all strata of the economic system. 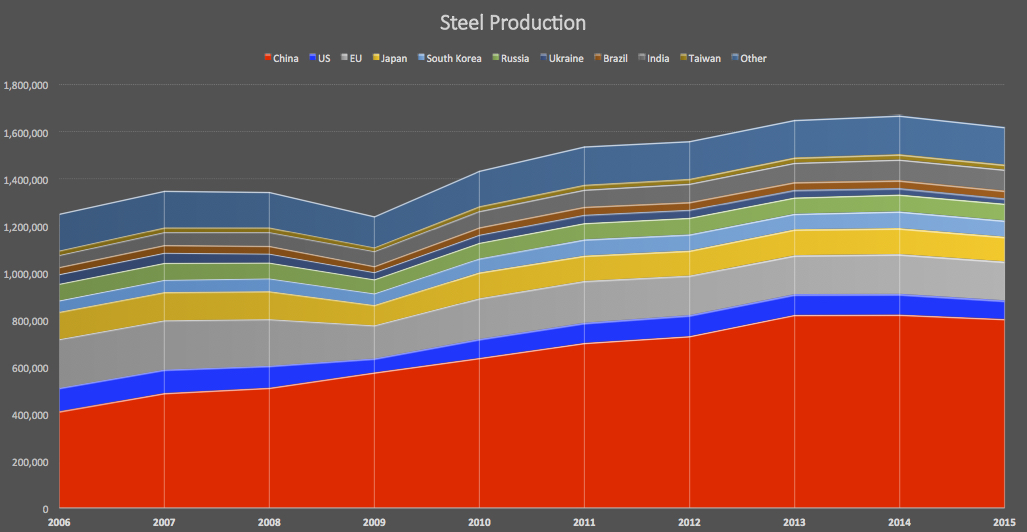 A global oversupply of bulk steel, and some specialty steels such as stainless, is causing the U.S. steel industry to shrink. China, according to the Coalition for a Prosperous America (CPA), leads the way in steel production, which rose 91% from 2006 to 2015 to comprise 50% of the world’s steel production in tonnes. Meanwhile, the U.S. share has fallen slightly to 4.9%, while other major producers have remained about the same. Of note, India, though still a minor player with just about 7% of world share, has more than doubled its output over the 2006-2015 period. 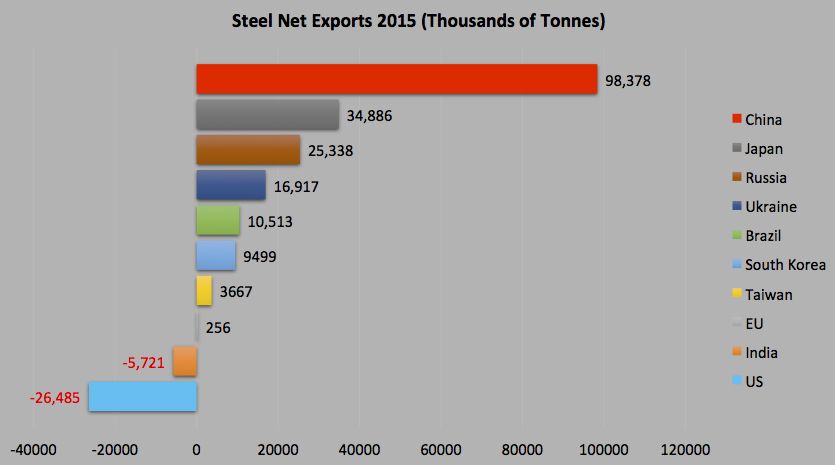 Though China has committed to reducing its production levels, it has instead increased them: 1.2% in 2016. According to testimony before the U.S. Commerce Department this May, by John Ferriola, CEO of Nucor, “China’s state-supported steel industry now exports more steel than is produced by all three NAFTA countries combined.”

“The world has 700 million metric tons of steel over capacity. 425 million of that is in China alone,” according to Commerce Department testimony by Ward Timken, CEO of TimkenSteel. “Demand in the U.S. is only 94 million. Imports are a real issue for the U.S. steel industry, particularly when foreign competitors don’t play by the rules.”

U.S. steel production fell 20% from 2006 through 2015, but the United States remained a net importer. Competition against state-sponsored overproducers is harming the U.S. steel industry. Germany and Canada are our main sources of imported steel, and Germany is pressing hard for consideration in any trade policy changes. The Europeans are concerned as well that U.S. efforts to restrict Chinese steel will simply cause China to reroute supply to European buyers, which has already been occurring. During the 2013-2016 timeframe, Chinese steel exports to the European Union rose 90%, and European steel prices fell 44%.

The reality is that our steel manufacturing industry cannot compete on price and still comply with internal U.S. rules on taxation, health benefits, retirement plans, and safety, among other regulatory guidelines. While there are ways to rein in some of those costs through optimizing plan choices and utilizing state and federal grants where available, forcing competitors’ products to reflect fair pricing is an intricate process that requires stakeholders to file complaints with the Commerce Department when specific violations are found. These efforts can help increase the costs of Chinese steel products to reflect what it would cost were China to abide by environmental, human rights and other cost-imposing regulations importing countries apply to their own steel producers.

The United States, the European Union and Mexico are just three of the entities to take recent action against Chinese unfair practices in the steel industry. All have, in the past three months, slapped tariffs or duties on steel imports from China. In the U.S. at least, such actions—targeted very specifically at sectors as they are determined to violate fair trade practices—occur every few months, so the battle is an ongoing one.

Critical to the health of the U.S. steel industry and the manufacturers of products using steel as an input are other internal policies in the States. The battle against unfair trade is only one theater in a larger contest. Rationalizing healthcare costs and taxation, especially as it affects R&D investments, must also be top priorities for U.S. manufacturers. While the Commerce Department, the ITC and President Trump deserve accolades for actions taken, further work is needed to protect the U.S. economy and national security from the decline of U.S. steel producers.

Precision Manufacturing Insurance Services (PMIS), specialists in insuring manufacturers and metal service centers and distributors throughout California, can provide you with the property insurance, general liability, commercial auto and workers’ comp coverages you require, as well as HR assistance and the loss control services you need to help manage your risk. We can also review your entire insurance portfolio and advise you on other areas of business protection. Give us a call at 855.910.5788.

Sources for Charts: Coalition for A Prosperous America