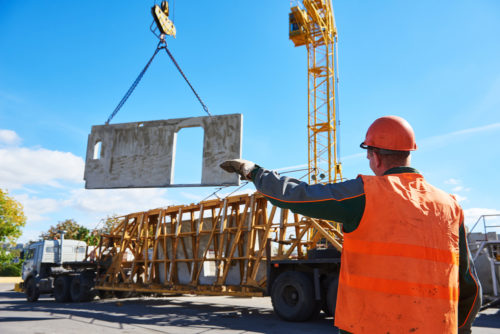 In California, CT injuries as a percentage of work-related lost-time claims have more than doubled in the past decade.

In our previous article, we at Precision Manufacturing Insurance Services (PMIS) provided an overview of some of the key findings from the California Workers’ Compensation Insurance Rating Bureau (WCIRB) on the impact of cumulative trauma (CT) claims on the state’s Workers’ Comp system. CT injuries are those that happen gradually at work, over a period of time, or during a course of repetitive work-related activities.

In this second article of our three-part series, we’re opening the curtain to reveal where the majority of these types of claims are occurring in the state. We also look at how CT claims result in higher attorney fees and increased litigation and how the state’s liberal stance for proving such injuries as work-related has established a breeding ground for fraudulent claims – all significant factors in the high cost of Workers’ Compensation for California employers. Notably, this affects manufacturers who’ve experienced the greatest number of employee CT claims. California continues to be the most expensive state for Workers’ Compensation at an average cost of $3.24 per $100 in payroll compared to the national average of $1.78 per $100 in payroll.

Greatest Number of CT Claims by Region in California

The Los Angeles Basin accounts for more than 56% of all CT claims, according to the WCIRB report, a trend that has been steadily increasing since the study began in 2005. The study looks at the ZIP codes from injured workers’ addresses to analyze the number of CT vs. non-CT claims. Specifically, Los Angeles residents accounted for more than 38% of all CT claims, which is nearly twice the percentage of non-CT claims filed at 20.8%. Residents of the Los Angeles region filed more CT claims than the combined total of the inland Empire, Orange County, San Diego and the Central Coast regions put together (see the exhibit below for the breakdown by area). 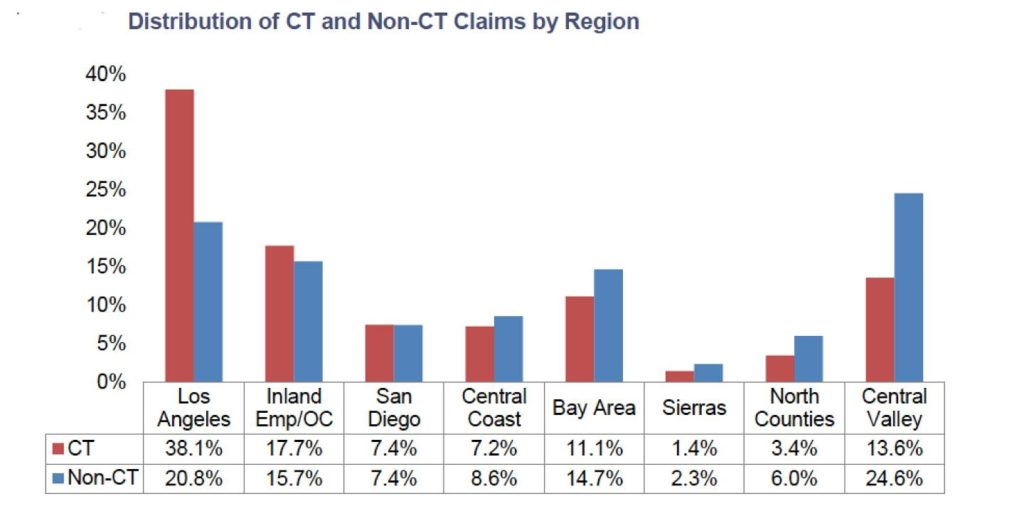 Furthermore, as we noted in our previous article, the majority of claims filed are for injuries to multiple body parts/systems (over 25% of CT claims in the study). One-third of these types of CT claims are being filed by employees in the LA Basin – that’s twice the proportion of the remainder of the state. Additionally, 8 out of 10 CT claims involve attorneys, four times the proportion indicated for non-CT claims (see exhibit below from WCIRB).

In the LA Basin, CT claims also have consistently had a higher attorney involvement rate than the rest of the state since the study began in 2005 (see exhibit below). And therein lies the rub. 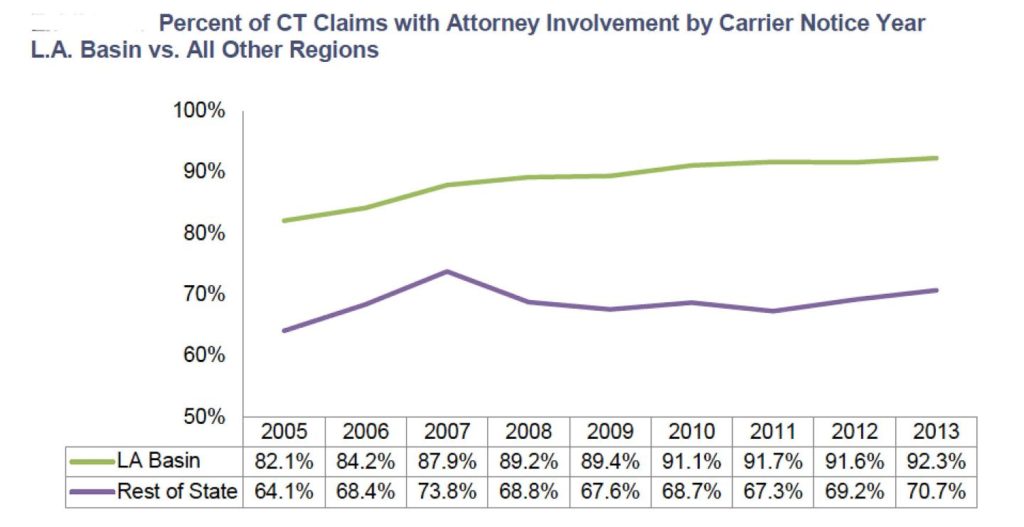 When Attorneys Enter the Picture

Because of the low burden of proof for CT claims (only a one percent (1%) causation threshold and a simple “preponderance of evidence” standard of proof) in California, many of these injuries are hard to peg as work-related, manifesting in claims of stress, sleep disorders and other ailments or dysfunctions. In addition, a provision of the state code doesn’t allow for a specific report date for an injury when it considers a cumulative trauma claim, which results in claims often being filed post-employment termination. Indeed, some carriers say that one-third of CT claims are filed post-termination. Also, according to the WCIRB report, 37.3% of CT claims are disputed, leading to lengthy and costly litigation vs. 5.9% of non-CT claims.

After a one-, two- or three-year legal battle to determine whether the CT claim is legitimate, the court will assign a third-party physician whose job it is to determine how much if any of the injuries are valid and work-related. The court-assigned physician will typically find some small percentage (7%-12%) of the claimant’s soft tissue injury to be work-related. By this time, the Workers’ Compensation insurer has incurred $20,000-$30,000 of legal expenses, including defense fees, depositions, sub rosa, old medical record subpoenas, etc., to determine the validity of the claim. What’s happening is that instead of the claimant having to prove that an injury is work-related as with a specific injury, an employer has the burden of proving that the CT injury wasn’t caused by the work. Even if during discovery it comes to light that the employee had a prior auto accident or some other medical issue that may be the primary cause behind the injury, a physician in many cases will still reason that the claimed soft tissue injury was most likely aggravated by his or her employment. This is all it takes for the injured employee to receive indemnity payments for a proportion of his or her overall injury. Typically, a CT claim is only dismissed when the third party physician completes a comprehensive evaluation and on the rare occasion states that any impairment is entirely the result of a specific non-work-related injury or that there is no medical evidence to support the employee’s claim of injury.

How does this impact comp costs? According to the WCIRB report, estimated benefits and expenses for CT claims have 43% higher medical payments, 58% higher indemnity payments, 119% higher expenses and 53% higher total costs than non- CT claims.

In addition to the higher expenses involved in settling CT claims, there is greater exposure for fraudulent claims. In fact, employers in the state are seeing an increase of outright fraud from employees that have been laid off or whose employment was terminated for valid reasons and then decide to retain an attorney to file a CT claim on his or her behalf. Despite employer’s policies that all work-related injuries must be immediately reported, and while there have been no specific injuries employees can point to, many are now claiming that “work” has worn them out and that they are therefore entitled to find indemnity (paid time off) through the Workers’ Comp system. Attorneys are capitalizing on California’s liberal laws and actually prospecting for employees with CT claims. A TV commercial has gone as far as to suggest that employees may be injured and not even know it, suggesting that a visit to the law firm will get them paid. There have been several instances of attorney’s business cards being passed out at urgent care centers. Just Google “CT claim Workers’ Compensation”, and you’ll find that the first several listings that show up are law firms including offers for free injury evaluations.

As a result of the out-of-control situation in California with regard to CT claims, some have suggested steps be taken to remedy the problem, including taking cumulative trauma claims out of the Labor Code and allowing employees to make cumulative trauma claims as they do with a specific injury. This places the burden of proof on the employee to show how this trauma is more than part of the “wearing out/aging” process. In addition, some suggest looking at changing the definition of a CT injury to more closely mirror that of psych/stress claims. The employee will have to show how the preponderance of actual work, absent the normal aging process, had caused additional disability that should be covered. Also, people have called for legislators to look at other states and their requirements and limitations for CT claims to assess whether similar restrictions will work in California.

California is considered the most liberal in the nation when it comes to handing out CT indemnity awards, with a ready base of lawyers and doctors set up to document the malady and set the process in motion. The fallout from the high rate of CT claims and the associated costs are clearly negatively impacting the Workers’ Comp system and employers throughout the state. Claims management at the insurer level and at the broker/agency level has now become critical. California manufacturers must look beyond annual premium price shopping, and understand the importance of choosing a broker partner that proactively assists them in protecting their business.

In our last article in the series, we will take a look at the impact CT claims are having on manufacturers and the toll it’s taking on their Workers’ Comp premiums. PMIS specializes in providing a total insurance solution for manufacturers throughout the state, including Workers’ Compensation coverage and on-the-job safety, loss prevention strategies, and claims management to help mitigate injuries and accidents and keep premiums in line. For more information about our insurance and risk management solutions, please contact us at 855.910.5788.